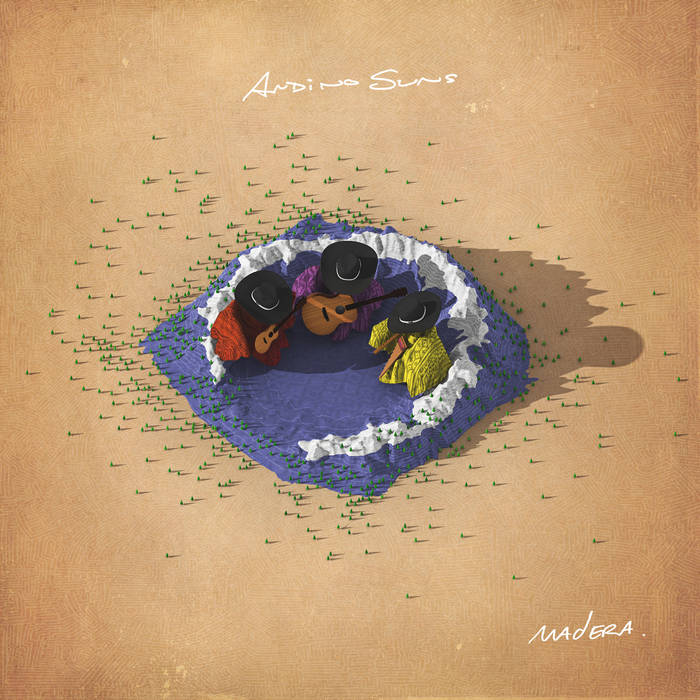 It wasn’t easy for Andino Suns to get to where they are today. The recording of their third full length LP, Madera, was difficult and ambitious and full of decisions both back-breaking and emotional, yet ultimately essential in the evolution of the band.

It’s a collaborative, homegrown record in which they’ve incorporated some of the most talented, hardworking musicians Saskatchewan has to offer. The Dead South, Megan Nash, Keiffer McLean, Scott Richmond and members of the Regina Symphony Orchestra all make appearances on it. The band also incorporated some international flair by bringing in world renowned percussionist based out of Montréal, Daniel Emden, as a co-producer. Emden, who has performed with the prestigious Berklee World String Orchestra out of Boston, sharpened his skills working with some of the best artists South America has to offer.

Madera combines the sizzling sounds of South American sun with the earthiness of prairie solitude. It’s laced with elements of traditional Andean music; (those with a keen ear for sound will notice charango, quena and Toyos) yet it also contains the charm and sensibilities of art, which, although far from its origins, feels more than comfortable in its surroundings.

The music of Andino Suns may have been forged in the fire of Chilean revolt –which it undoubtedly is- but it is also rooted heavily in the fabric of the vast Canadian prairies.

Andres Davalos, as well as both guitar players Andres Palma and recent addition, Cristian Moya (formerly of Descalso), are the sons of political exiles who found security in the Canadian prairies. They were raised in households that cherished its Chilean heritage. They learned the language and the history; they read the books, watched the shows and, most importantly, they listened to the music.

The band hasn’t slowed down since its inception in 2009. Their raucous and memorable live performances have made securing festival gigs pretty easy; and the band’s popularity and skill continue to grow steadily. Performances across Canada have included JunoFest, SaskTel Jazz Fest, the Regina Folk Festival and Ness Creek in Saskatchewan; Festival du Bout du Monde, and Festival des Traditions du Monde in Quebec; and Cold Snap Festival in British Columbia. They also represented Saskatchewan at Mundial Montreal, Folk Alliance International in Kansas, and the 2015 Western Canadian Music Industry Awards in Victoria.

In 2013 they released their debut, self-titled album. It was uplifting, dance-able and smothered in romance. Their sophomore recording, It’s Time to Rise, dropped in 2014 and was nominated for a Western Canadian Music Award for “World Recording of the Year”. The record managed to cultivate the band’s proud heritage while simultaneously crafting songs that are feisty, identifiable and relevant.

On September 11, 1973, the metallic yet proud voice of Salvador Allende could be heard broadcasting itself to the people of Chile. He was barricaded inside the presidential palace, awaiting his inevitable death at the hands of US backed forces that were about to overthrow his government and install a military dictatorship. With his final words he reinforced the revolutionary spirit of his leadership.

“Social processes can be arrested by neither crime nor force. History is ours, and people make history”. –Salvador Allende

That is the spirit behind Andino Suns. It is music for and about the people whose labour makes the world what it is; and the people who refuse to lay down to injustice and inequality. It is music that addresses the youth; “those who sing and give us joy” as Allende said; and it is music that addresses mankind; “the worker, the farmer, the intellectual; those who will be persecuted”. It is the kind of music that, were the music silenced, you would continue to hear it.

Like Allende, Andino Suns have “planted a seed in people which will not be shriveled forever.”
There may come a day when the music is gone. But within music lies ideas and passion and revolt; and that is the stuff of history.

In the space where the vibrant traditional sounds of the Andes Mountains meets with the folk-rock of the Canadian Prairies, Regina’s multi-instrumental group Andino Suns have been captivating audiences since 2009 with fiery instrumentation, inspirational live performances and a resounding message of freedom, hope and love. ... more

Bandcamp Daily  your guide to the world of Bandcamp

cktrl talks about heartbreak and his new record 'Robyn'